The work of photographer Bruno Paccard in wall decoration is essentially about nature. The landscapes that we offer here as paintings, posters, wall hangings or wallpapers are from nature. Some illustrate Zen with bamboo, others a colourful floral wall decoration, and still others sometimes a lush green jungle. Full of life and colour, Bruno Paccard's wall decoration takes you on a journey. We let you discover it below!

Who is Bruno Paccard? 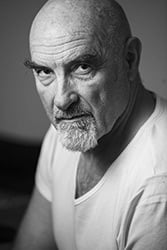 Initially trained on the job as a film-maker at the French newspaper "Nice Matin", then later as a lab shooter, photography is second nature to Bruno Paccard. His experimental photography reveals that he has a meticulous eye for detail, with a style rooted in the heritage of photography and the recorded image in general.

Human beings have always been the centre of this photographer's work: particularly in his works based on the rural world, such as "We are the last", "Lyon's prisons", "Community life in the neighbourhood", as well as on the way men look at women. This humanistic perspective can also be seen in "Memories of asphalt", where traces of existence stuck in the asphalt, shadows on the ground and tracks which have been left behind serve as archaeological findings to deepen our anthropological understanding of urban societies. With his contemporary photos which focus the rare beauty of urban fossils, he ensures no moment is lost over the passage of time. Several exhibitions dedicated to him combine two elements: the tradition of photographic reportage combined with contemporary research.