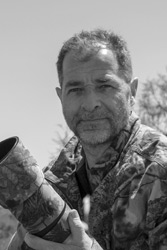 Originally from Vercors, in France, his photographic work is centred around nature. Passionate about both animals and landscapes, he now travels the region of Vaucluse in search of a feeling, a vision, that he can capture and portray in his photographs.

A professional photographer, he participates in major photo competitions and exhibits his work at nature photo festivals in France. For example, he was a finalist in the Birds category of the 2016 Wildlife Photographer of the Year competition run by the Natural History Museum in London with his portrait of a muddy flamingo. He received an honourable mention in the international competition IPOTY in 2017 with his photo of a bee-eater.

At the moment, he's focusing on creating visions of the world that would normally be beyond our perceptive abilities: panoramic landscapes that stretch beyond our visual field composed of multiple assembled panoramas; a mini planet encompassing the entire Earth contained in a pocket handkerchief; a mirror ball composed of 360° photos; an assemblage of long exposure shots which smooth the surface of water. The possibilities are endless and the Earth is my playground.